Do you have a story to tell? Click here to send it to us!

A report from Michael


Lots of fakes, I was there hidden. Saw something covered retrieved around 3 a.m....I became a deputy sheriff 1 year later in florida. Sworn arrest powers deputy! I know what we saw, my friend who took pictures will not even talk to me let alone show me the pictures. Some one got to him less than 2 months after it happened.

Retired and have nothing to gain telling this. Something came out of the water, the lantern story is B.S. no kid in Carbondale would throw a working lantern away. Poor section of town, poor excuse for a 10 ft diameter glow in that horrible water. Batteries would short, old technology, and a flame is laughable.

A report from Michele B.


It was the night of my sister's confirmation. We were having a party at my Mom's house on Washington Street.....about two block from the site of the landing. The party was breaking up and people were leaving. When we went outside we noticed that there was a bunch of commotion going on in the neighborhood. My grandfather took my brothers and I for a walk in the direction of Russell Park. There was about 200 people funneling into the football field area. We couldn't get close to what was going on so my Grandfather took us home.

After he dropped us off, he approached the park from the rear end (on the opposite side of the lagoon). They had the area taped off and federal and state agents were on the scene. My grandfather sat in the car and watched for several hours. Large lead-lined trucks were brought into the site from Pearl Street (a very difficult task) to avoid the crowd on Church Street and Russell Street. It was very late at night when this occurred. A crane-type piece of machinery pulled an object from the water and placed on a cart. The object was loaded into the truck and was taken away.

My grandfather said that the object did not look like a lantern or a satellite. It had the appearance of looking like a very small vehicle.

A report from Thomas Z.


I read in the August 21, 2013 issue of the "Carbondale News" that the 40th anniversary of the UFO landing in Carbondale is approaching. I remember reading about the UFO in the "Carbondale News" at that time and stories of all the hoop-la about the UFO. I retired from the Department of Defense after 32 plus years of service and served in various positions in the military and as Department of Defense Civil Service employee. In retrospect, I would like to submit my thoughts on what happened that November night some 40 years ago.

During 1974 the Cold War was still on but it was winding down, however both the US and its Allies and the USSR and its Allies were still suspicious of each other the US had launched spy satellites into space to verify the Soviet compliance with Arms Control.

These Spy Satellites would orbit the earth and photograph points of interest. The satellites would eject film cartages that would then parachute back to earth and recovered by the military. The film would then be developed and the photos viewed. It is possible one of these cartages malfunctioned and was ejected at the wrong time. This would cause the cartridge to land at the wrong place in this case the Carbondale silt pond.

Several of the witness statements also lend credence the above scenario. I would suspect the cartridge would have a beacon of some sort both visual and electronic. The boys reported the object was "sizzling" when they saw it in the pond. If it was ejected from space I would suspect it would be quit warm, however, the cartages were designed to be lowered by parachute. It is possible the chute did not work. It would also seem reasonable that because these cartages were classified "top Secret" at that time I do not think that the Government would be running around announcing the object was theirs. They would recover the object secretly and use a cover story.

Another report from Thomas Z.


I would also add that the cartridge that may have landed my not necessarily be from the US it may have been from The USSR. If so even more reason for a cover story.

Upon reading the accounts of this story I saw that there were reported sparks and flames from the object. If the chute to land this item caught on fire it would have most likely caused sparks and smoke when it landed. There would be a smell also either from the sparks or from the hot metal of the capsule. Have you ever left and empty pot on a stove?? It smells of metal after a period of time.

See this web site for more information. It explains why I think my theory may be right.

I was born in Carbondale and lived in Simpson when I was not over sea in Germany, France, or Japan with my father who was a career Army officer. I went to St. Rose High school and graduated from the University of Scranton. I then went to work for the US Army as a civilian accountant and also was an auditor with the Air Force Audit Agency. I retired in 2006 from The Defense Finance and Accounting Service where I was the Chief of the Fiscal Accounting Office.

I also have Masters of Public Administration from Ball State University in Muncy Indiana. 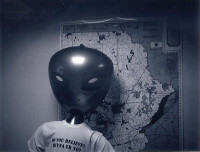